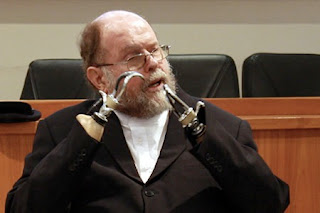 Last week a remarkable man was in Italy; he was here to tell his own story and mission on the Day of Memory, the anniversary of the liberation of Auschwitz on 27 January 1945. His name is Michael Lapsley (pictured during his talk at the American University of Rome); he is an Anglican priest who went to South Africa in 1973 from New Zealand and very soon took an active role in the anti-apartheid movement, so much so that he was exiled first to Lesotho and then to Zimbabwe. In 1990, after Nelson Mandela had been released from prison, he was the victim of a letterbomb which destroyed both hands, an eye and the hearing in an ear. Since then, he has worked to use memory to heal past wounds: “knowledge and acknowledge” is the key phrase of his mission. First of all there must be the knowledge of what happened in the past and then for any form of healing, there has to be acknowledgement of the tort committed by the perpetrator. This is true for nations and communities as it is for individuals.

He took part in South Africa’s Truth and Reconciliation Commission and later founded the Institute for Healing Memories “We believe that when personal stories are heard and acknowledged, individuals feel healed and empowered”.

After listening to Fr. Michael, the following day, I witnessed a ceremony in which a tragic episode in World War II became part of a memory which was being healed; the story was being told and the suffering acknowledged. On 28 January 1944, US Airforce planes bombed a train and a bridge just north of Orvieto in Umbria. There were more than a thousand allied POWs on the train and between two and three hundred died. In the general picture of the war, it was a minor incident and was not even part of a battle where death can be justified by heroism or the overall aims. It was a case of friendly fire and so certainly not to be emphasised and glorified by the Allies. So the efforts to create the monument were very much part of establishing knowledge of the event and acknowledging responsibilities and the sufferings of survivors or relations. 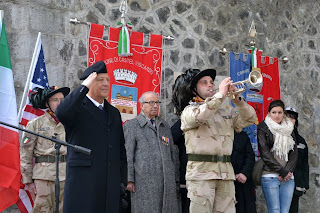 The ceremony was the result of hard work by local historians in Orvieto and a British veteran of the Italian campaign, Harry Shindler (pictured in the centre during the ceremony) who has spent the last decade uncovering some of the minutiæ. Shindler spends a lot of time looking for single victims of the war but never loses sight of the reasons why he and millions of other allied soldiers were fighting more than 60 years ago.

As for the Day of Memory itself, it has become very much part of the Italian calendar with speeches by the President to schoolchildren invited to his palace, the Quirinale, as well as thousands of other initiatives. My local cinema showed “Sarah’s Key” for schoolkids in the afternoon. At first they were loud and giggly but soon shut up and followed the film enthralled.

A few days before the speaker of the Chamber of Deputies, Gianfranco Fini announced a university network “to know and not to forget” saying “without memory, dangerous passages open up”.

Fini is the most striking example in Italy of the principle of “knowledge and acknowledge”. He is a man of the right with his political roots in the neo-Fascist MSI who precisely because of that has done more than anyone else to force the right to acknowledge the crimes of Mussolini and Fascism.

He is correct too, to urge us not to lower our guard. On 27 January, there was a Holocaust negationist conference in Como. More insidious in a way was the case of Mario Vattani, the Italian consul in Osaka who has a long history of extreme right wing militancy. He was recalled after a video was posted with him singing in a fascist rock band with lyrics “in five years I’ll hoist the black flag”. Vattani is facing disciplinary proceedings within the Ministry of Foreign Affairs and the Foreign Minister, Giulio Terzi has said that fascism is incompatible with the state – fair enough but Vattani has been a diplomat for 20 years and has never made a secret of his activities. The place where he was filmed is Casa Pound, a very popular extreme right wing organisation, seen by some as “Fascism lite” but in practice a semi respectable front for genuine extremists. Memory here seems to be more a forgettery.

Another recent case of domestic fascism (and forgetting) was the Turinese schoolteacher, Renato Pallavidini, who told the world on his Facebook page that “I could carry out a massacre in a synagogue” repeated on YouTube.

With all of us, unfortunately, there is a tendency to remember the torts commited against us and forget the ones that we have committed. There was a an uproar in Italy recently when the International Court of Justice at the Hague declared that today’s German state was not liable for civil damages awarded by an Italian court for Nazi massacres. Italians, not surprisingly, were angry that somehow Nazi were being declared not responsible for the reprisal killing of civilians (not quite what the court found). Today’s German government has indeed accepted responsibility for the massacres (and for example, made special efforts for the reconstruction of Onna near L’Aquila after the 2009 earthquake because of a Nazi reprisal there in 1944).

No one denies the Nazi massacres but “acknowledgement” is not only about civil liability, and there are many torts to be remembered and forgotten.

In Italy (and only Italy), this week also sees the “Day of Memory” for the victims of the foibe (those Italians and Yugoslav sympathisers killed by Yugoslav troops in 1943 and 1945) and the Istrian refugees insituted in 2004. The number of victims is still disputed. The commemoration brings together left and right wing Italians but makes no mention of the Yugoslavs killed or interned before and during the war.

We are right enough to remember both the Nazi horrors and apartheid but that is not enough; to really heal, we have to open our minds to everything that happened and put ourselves collectively and nationally on the psychoanalyst’s couch… and that is not easy.

First of all, I would like to express my gratitude to you for writing about the "painful memories, healing memories" at all. As you can see, I like the title. And the text, too. Now, below are my two c(omm)ents ;)

re: "(...) no mention of the Yugoslavs killed or interned before and during the war."

Exactly. No mention of my paternal grandparents' house being burned down completely, under the Mario Roatta's watch, as part of Italian ethnic cleansing of Slovene population under Italian occupation, echoing the - forgotten, (again ?) - Mussolini's 1920 speech where he said: "Di fronte ad una razza inferiore e barbara come la slava non si deve seguire la politica che dà lo zuccherino, ma quella del bastone. [...] I confini dell'Italia devono essere il Brennero, il Nevoso e le Dinariche: io credo che si possano sacrificare 500.000 slavi barbari a 50.000 italiani". And my grandfather's house was only one of the houses in the village which was itself only one of the villages being burned down...

re:"(...) put ourselves (...) on the psychoanalyst’s couch(...)"
Yes, it is not easy. And besides us, i.e. (or is it me only?) the trans-generational trauma victims, it seems now the new generation of Italians are willing to put themselves on the proverbial couch, too. At least Davide Toffolo with his 2008 graphic novel L'inverno d'Italia does. You can see the content of his book (page by page, full content) in this video and read a book review about it here http://fumettologicamente.wordpress.com/2011/01/21/il-dolente-teatro-dellorrore-di-toffolo/