Fascism in Italy – Old and New. 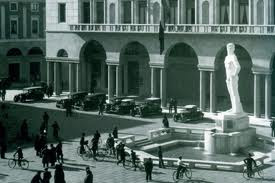 Like the odour of a stale changing room, the smell of fascism keeps on reappearing. Stale sweat and cheap cigarettes just need some springcleaning but while Italy’s houses tend to be spotless, the political house leaves a lot to be desired.

Two hundred and fifty metres from the spot where a fascist bomb in Brescia killed eight people and injured a hundred 39 years ago, the city council wants to re-install a statue with the disturbing name of Era fascista.

The statue is a 25 foot tall colossus of Carrara marble (above left), a male nude who stood in the central Piazza della Vittoria from 1932 until he was removed in 1945. He was known locally as Bigio and Mussolini thought very highly of him. After Liberation, there were antifascist attacks on him and the new administration along with the British decided to remove him.

The present council is centre-right People of Freedom (PdL) and Northern League (LN) and the idea of returning Bigio to the square comes from the two members of the council with far-right antecendents according to Manuel Colosio of Brescia’s Radio Onda d’Urto, Mario Labolani who started his political career in the neo-Fascist MSI’s youth movement and Andrea Arcai son of the magistrate who led the first, unsuccessful investigation of the 1974 bombing. Their intentions of rehabilitating the Fascist era by erecting a statue with just that name are clear but they were helped by the lack of any serious opposition.

The previous (centre-left) mayor, the PD’s Paolo Corsini, had aired the idea of returning Bigio to Piazza della Vittoria in 2007. Ironically, Corsini is an academic historian of fascism so understands the symbolism of the statue more than most. As a deputy, he was a member of the Parliamentary Commission which examines terrorist bombings so he knows more than most about the 1974 Brescia bombing too. The main opposition is from the partisans’ association ANPI while the PD complains more about the cost €460,000 than the political implications.

The cost certainly adds insult to injury on the day when two pensioners committed suicide because they couldn’t manage on her pension of €500.

Last year there was a similar episode in a town south of Rome when the Fascist war criminal, Rodolfo Graziani was honoured with a mausoleum costing €130,000 of public money.

Both initiatives have been met by a dull silence in the Italian mainstream media. I only heard of the Brescia story when the Guardian’s Lizzy Davis called me about a piece she was writing. Colosio at the Brescia radio reckons that the national papers like Corriere della Sera or La Repubblica are not interested if they can’t have some sort of scoop – if the local papers have already run with it, then it’s old news. And he adds that the antibodies against fascism in Brescia have weakened over time.

And not only in Brescia.

Last week, a Rome high school teacher admonished a Jewish student telling her “in Auschwitz, you’d have been more diligent” when the girl left class because she was feeling sick. When the class accused the teacher of being racist, she made things worse, “I’m not racist – I just meant a place that was well-organised”… eh? To make matters even worse, the headmistress said “the teacher didn’t mean what she said and… she didn’t want to offend anyone and so she wasn’t reprimanded.

On Thursday, the mayor of Rome, Gianni Alemanno organised a demonstration in front of the Coliseum in favour of the Italian marines accused of killing two Indian fishermen. For a start, he ignored an order from the Superintendent of Fine Arts not to put up a stand (authoritarian if not fascist) and then, alongside the San Marco Brigade pennant (the marines) and the city flag was a banner of the Decima MAS, the brutal special forces which worked alongside the SS in Mussolini’s puppet republic between 1943 and and 1945 murdering partisans and civilians. The mayor did nothing to move the banner-wavers on and he was happy to have Mario Vattani alongside him. Vattani was the Italian diplomat transferred from his post after giving the fascist salute during a nazi-rock gig.

In Britain, when a premier league team employs a self-declared fascist, Paolo Di Canio, who gives the salute and has DUX tattooed on his back, there is a national outcry.

The antibodies are weak in Beppe Grillo’s Five Star Movement (M5S) as well. Their Chamber of Deputies spokeswoman, Roberta Lombardi wrote on her blog that fascism was positive because it had “a strong sense of the state before it degenerated”. That was three months ago when no one knew who she was and she since defended herself saying the remark was taken out of context but it was a surprising interpretation for what was a radical movement. Grillo himself has been accommodating with Casa Pound, the Rome-based “respectable” version of the extreme right and has made disparaging asides about Jews.

For 40 years after the war, almost everyone was at least nominally “anti-fascist”. Public discourse was rigorously anti-fascist. The few nostalgici kept their heads down except in very well-defined parts of certain towns (Prati and the Colle Oppio area in Rome for instance, were neri, black for the fascist shirts). Memorabilia was available but like pornography once upon a time, sold under the counter in brown paper wrappers.

Rehabilitation began in the ‘90s with the presence of four “post-fascist” (nice euphemism invented then) ministers in Berlusconi’s first government. It has continued apace since then.

I became conscious of the change when looking for a CD of “Ciao bella ciao” the iconic partisan song. I had to search through collections in well-stocked stores but at the same time, my local CD stall in the square had various collections of the fascist trademark songs “Giovinezza” and “Faccetta nera”.

The political dirt was swept under the carpet after the war with a very cursory springcleaning and the risk is that along with 80 year old statues, the ideas that created him and which he represents will also come back in their modern versions.

Email ThisBlogThis!Share to TwitterShare to FacebookShare to Pinterest
Labels: Fascism in Italy – Old and New.

I've been in Brescia several times, it is a fascinating town with memories of many ages: among these, the fascist period. I cannot say I like piazza della Vittoria, but being there is like entering a painting by Sironi. There is no such a place in Italy, I guess. Therefore, I'd not be bothered too much by a filological repositioning of an element. In fact, as you say, it was a center-left mayor that had first the idea. And, I do not find any point in saying that money could be better spent: two wrongs do not make a right.